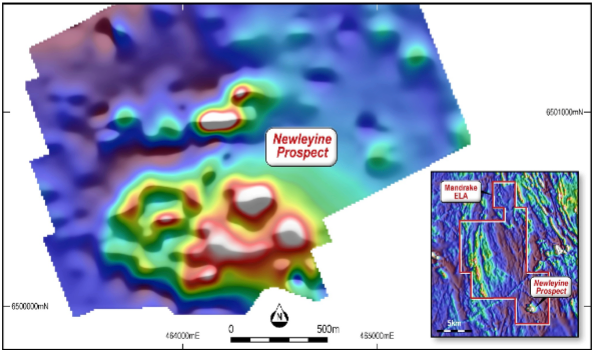 The Jimperding Metamorphic Belt is in the northern part of the southwestern Yilgarn Craton and comprises Archaean gneisses, arkosic paragneiss and banded-iron formation, interleaved with a variety of garnetiferous orthogneiss and ultramafic units.

Historic drilling of the Newleyine Prospect confirmed nickel grades to 1.18% and copper to 1,200 ppm within the relatively shallow lateritic zone.

Primary Newleyine grades observed from drilling carried values of 0.49% Ni and 0.02% Cu Crucially, samples were not assayed for PGEs.

As well as a high grade component in the lateritic material, three exploratory diamond drill holes completed by Australian Anglo American established the presence of widespread Ni-Cu-Fe sulphide mineralisation of 0.24% Ni and 172ppm Cu over drill widths of up to 240m through a dunite body. Samples were evidently not assayed for PGEs or gold.

Mandrake is currently assessing the Newleyine Prospect for Ni/PGE mineralisation analogous to that discovered at the Chalice Julimar discovery. The Julimar discovery has radically changed the geological interpretation and indeed commercial potential of the Jimperding metamorphic belt and associated ultramafic intrusives.